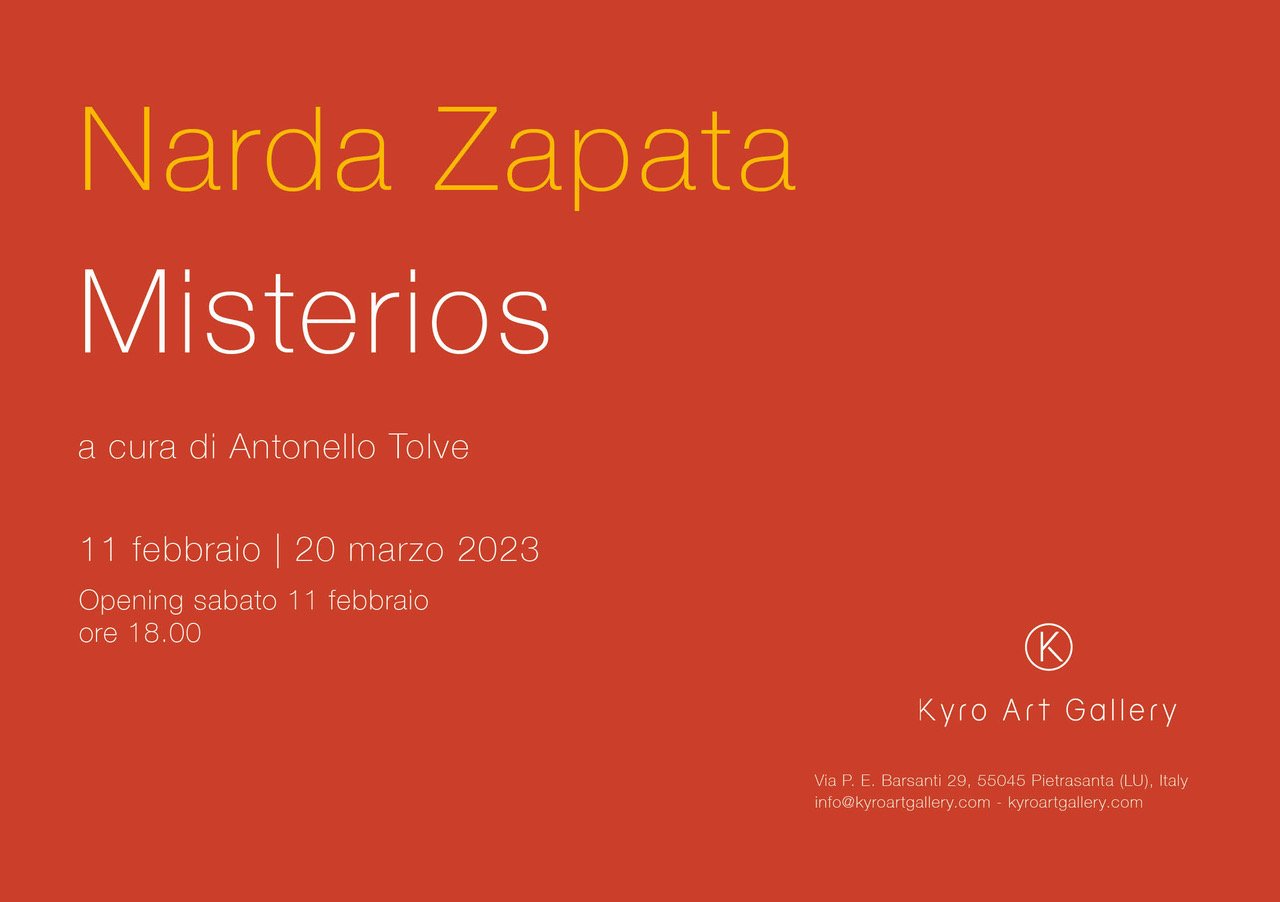 The Kyro Art Gallery in Pietrasanta is pleased to announce an important solo exhibition by Narda Zapata entitled Misterios, which will be inaugurated on Saturday 11 February 2023 at 6:00 p.m.

For her first exhibition in the gallery, Narda Zapata offers a project that is entirely focused on the relationship of participation and constructive interference between different cultural models, distant from each other yet nevertheless interconnected. In his introductory text, Antonello Tolve notes that “Zapata firstly places herself on the plane of observation and direct experience with archaic (primordial) phenomena tied to spaces of the present. She continues with a theoretical reflection on society through the use of an ars combinatoria, capable of welding the fluctuation of fantasy with the modalities of ratio (reason and criteria) and establishing a new relationship with tradition. Tradition that is translated and inevitably (necessarily, delicately, deliberately) betrayed and transferred into visual spheres open to other cosmogonies and the fabric of other cultures.
At the centre of this original project, the artist focuses on the Andean ritual of the ch’alla, which is based on a profound relationship between the Jache (the person) and the Pachamama (Mother Earth). Of rural and pre-Hispanic origin, the main purpose of the ch’alla cult is to thank the Earth with gifts, with mesas dulces (votive meals) containing a whole series of elements—wool, white or dyed yellow, green, red or purple, misterios (bars of sugar with images laden with symbolism), wira k’oa (a sacred medicinal plant that grows on the highlands), a sullu (llama foetus), gold leaf, grains and walnuts, fruit, pieces of palo santo (bursera graveolens) and incense, some coca leaves, streamers, flower petals, alcohol, honey—all arranged in a specific order: for example, on a sheet of paper the wira k’oa will be surrounded by the wool, and then the sweets, sullu, coca arranged after, followed by all the other materials. Once the offering is ready, it must be blessed with alcohol, traditional wine or beer, and placed on a small brazier for the fire to consume and reduce it to ashes. Among the elements included in the mesa, the misterios (usually 12, to indicate the apostles or months of the year) are of primary importance as they represent requests or thanks linked to positive outcomes in love, marriage, study, abundance or wealth.
Stripped of folklore and recontextualised in an environment that mixes origin and original, the various elements that make up the mesa become, for the artist, fertile ground for a narrative that begins with Andean cosmogony and energetically spills over into the present: in Zapata’s analysis used to purify the elements of their strictly traditional meanings, an analytical order is applied through which a powerful decomposition of the mesa takes place, from which some of its inner elements emerge, shifted within a balanced confusion of linguistic styles and of multicultural and polyphonic moods.
Alongside a series of sculptures from 2022 and 2023, three prestigious Omaggi a Morandi (2022), three tapestries and a large constellation of misterios (including Sentado sin tiempo, Post tenebras lux, Los ritos del amor, Copacabana, La espera, Cada tiempo, Santiago)—all of which were created especially for her solo exhibition and placed in display cases that create veritable devices—there is also a large installation on show, Apacheta (created in 2023 and designed for the gallery space), where the artist not only radically dismantles the mesa and redevelops it, making it explode within the exhibition space, but also traces the mountainous outline of the Waraco Apacheta, a site known as La Cumbre (near the subtropical zone of the Yungas) which is one of the preferred sites for burning and then burying ashes to ask for good health, a home, love or prosperity from Pachamama.

Narda Zapata
Narda Zapata (La Paz, 1981) graduated in plastic arts from the Universidad Mayor de San Andrés and has a master’s degree in contemporary art history from the Universidad Metropolitana de Caracas. From 2005 to 2008 she attended seminars with Roberto Valcárcel. In 2007 she founded the Aschoy collective, and in 2008 she was assistant to Jannis Kounellis on a project at the former railway station in La Paz. Her work stems from a reflection on the body, taken as a place of exploration, experimentation, provocation and the origin of language. Alongside the importance of the body is an intercultural vision matched by a multi-lingual approach that leads her to use painting, video, sound, performance, sculpture, intervention in public space and installation. Convinced that every culture is the result of exchanges, Narda Zapata always starts from the traditions or customs of her country to then compare them with those of other societies. Eddy Camejo, Lorena Gonzales Ineco, Efraín Ortuño, Nicholas Petrus, Antonello Tolve, to name just a few, have written about her.